Two major concerns of any cast or crew. Pay. Visibility.
We pay. We give the all important 'correct' visibility and outreach 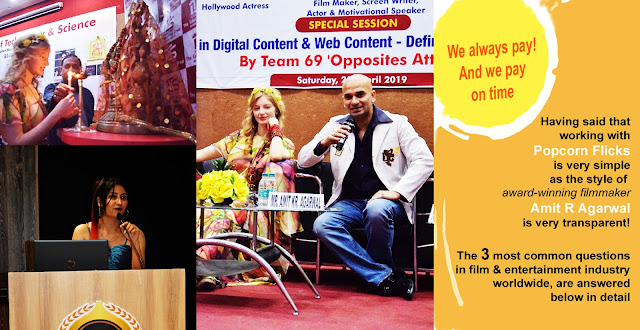 1. Do you pay
Yes. We are one of those few production-houses that pay on time!
We create the all important profile with our established vertical
What do you need more?
The work of cast or crew is showcased at Top-10 film festivals and film markets
The unique deliverable to cast or crew is the Awards and recognition


2. What about canceling shoot at last minute
Popcorn Flicks plans meticulously with 100% record of being On-schedule. Completion. Release.
We are .01% of the production-houses that have cent-percent completion record!
Even for guerrilla or no-budget films or content; absolutely no cancellations ever. We meet an actor or crew over coffee. Discuss details of the shoot in advance. This ensures smooth filming.

3. What about nudity or sex scenes, if any
Popcorn Flicks repertoire include films in a very diverse and wide variety of genre, screened during the Top-10 film festivals and film markets including Cannes Film Festival, Marche du Film, AFM, Berlinale, where nudity and sexuality is acceptable narrative. Few films referenced, feature top actors and directors; few won awards at the Cannes Film Festival - Blue Is The Warmest Color, Gaandu, Nymphomaniac, Love, En La Cama, Q, The Desire, 365 Days - Netflix. Sex scenes if any, are discussed to minutest detail in advance, even for guerilla-style filming, where it might just be single-person with the actor or actress. Release and usage; commercial or film festival only, is also detailed.
Agarwal is one of the first intimacy directors in Asia. In his cinema master-classes, he tells that intimacy and sexuality need deep artistic and cinematic understanding, cast and crew have to treat them like any other scene and be natural, comfortable, spontaneous. Popcorn Flicks provides safe, happy and conducive work-culture. Comfort of cast or crew is of utmost importance. Film-school grads watch both mainstream and art-house films with nudity and sexuality for understanding; cast or crew not from a film-school, can watch the films for broadening their cinematic perspective. Actor or actress are free to ask all questions, discuss all scenes, shots and details like usage and crew-size; just about any question on mind. Idea is clear, it is best to work with full clarity or not to work at all. Worldwide, actors or actresses with evolved cinematic-perspective are comfortable with nudity and sexuality, waiting to do the role! Send your acting reel, portfolio and profile

Press and PR: Lead Actress featured on national media
The Times of India, Mid-Day, Sahara Samay, to name a few 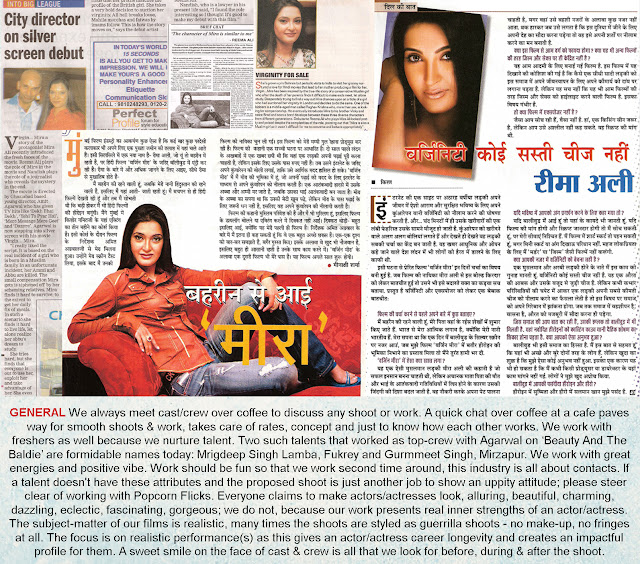