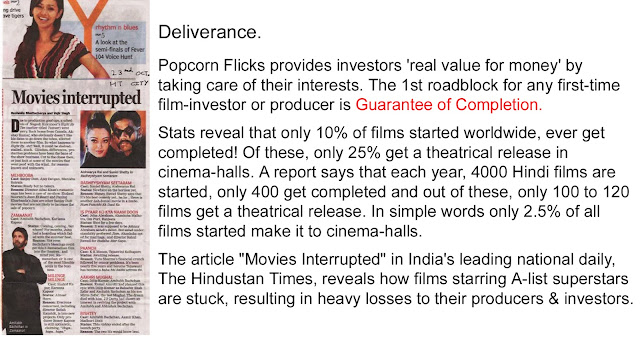 How does one break this bottle-neck. Popcorn Flicks guarantees completion; due to our network in the Indian Film Industry, we guarantee a release too! In nutshell, we safeguard two prime concerns of any Film Investor worldwide - 1. Completion of film 2. Release of film

A lot of investors ask, "what is the business projection of the movie?"
21 times is the answer a lot of film-makers give.

The next query is, "is there a guarantee?"
No real filmmaker gives a guarantee! (Fake ones that give, are the ones that result in heavy losses for investors) Fact is there are absolutely no guarantees for any business, let alone, film business. William Goldman, famously commented about the impossibility of accurately predicting a film's performance before its release, "Nobody knows anything."

What investors need to understand is:
- Projections are earning potential. Projections are not guarantees.
- Clarity that there is a risk of recouping the investment, let alone turning a profit
- Can afford the loss and is/are prepared for it

To cut down the risk & limit the losses of investors, if any, Popcorn Flicks has introduced - Minimal Risk Model - for those that want to invest in the Film Industry worldwide, but want to limit their losses to a preset amount. The investor can invest a nominal amount of Rs.10lacs and get the credits of Film Producer on the film. This amount is equivalent to the cost, many potential film producers or investors spend in a year on meetings over coffee with no output (Ask for details). 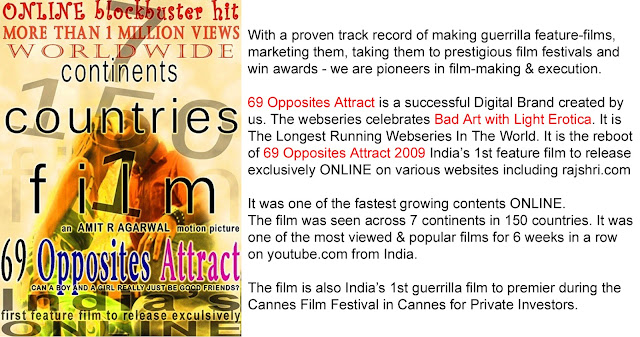 Successful screenings We have had screenings of our films & filmed content at prestigious film festivals and film markets in India, US and Europe.

Value for money No other production-house can give manifold benefits in a modest budget.

No cost over-runs No haggling regarding increase or escalation in budget.